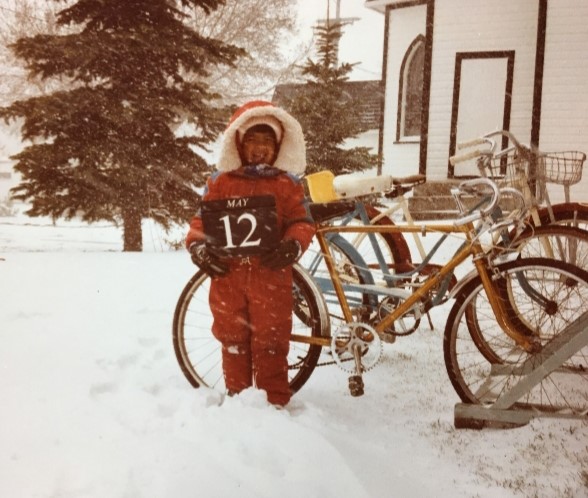 It’s been four or five years since we’ve seen winter precipitation in ENC. I’m sure you took plenty of pictures of your own, so I’ll spare you seeing even more.

Instead, I’ll step back in time to a small village (yes, it was so small it was officially considered a village) called Neudorf which is in the province of Saskatchewan in nearby Canada, that wondrous big recreational park, with cities, north of the border.

My family and I were used to seeing snow during winter. Lots of it. All the time. That’s why it’s said Canadian weather is simply ten months of winter and two months of cold weather. That’s fairly true.

The difference between your land and my land (remember the song – catch that, by the way?) is that nothing shut down when it happened. Nothing was canceled. Nothing was postponed. NOTHING WAS CLOSED! For whatever it was we needed and had to go from Point A to Point B to get it, it just took a bit longer to get there and back.

May 12th is not the latest we’d seen snow, however. One summer, it snowed one month later. Yep, really. And other summers as well, you lose track after a while. It became so common that a Canadian rock band named one of their albums “Snow In June”. Hey, it’s par for the course, though none of us were outdoors golfing at the time. We were shoveling the walks. Rather than by cutting grass, that’s how Canuck kids earned a few bucks to get a stick.

Then we played street hockey all year round. Game on, Garth!

By the way, that’s Jennifer, my younger sister, in the photo. She said to give her credit where credit was due, even though she won’t get paid for it. The bicycles behind her were half buried in snow by the time the sun set that day.